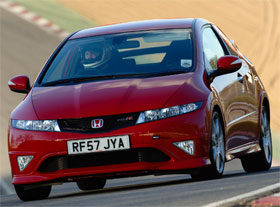 Honda announced today that the Honda Civic Type R is the hottest hatch in UK. The new version of the Honda Civic Type R was launched in March last year and February this year it has been sold in 5,192 units. This makes it Britain’s most popular hot hatch. In comparison, the Focus ST (all variants) was sold in 4,778 units.

Honda’s latest, more refined Civic Type R is the biggest-selling 3-door hot hatch in the UK. From its launch in March ’07 to the end of February, a total of 5,192 customers got hold of the keys to a Type R, making it Britain’s most popular performance hatchback. Over the same period, Ford sold 4,778 of the 3dr Focus ST (all variants), while the 3dr Golf GTI (incl. Edition 30) recorded a total of 1,984 sales. And that’s not all. Here are some more Type R facts from the past 12 months:

– In response to previous Type R customers’ pleas for a more refined, high specification cabin, Honda introduced the GT grade – and a huge 90 per cent of customers opt for this more comfortable, better-equipped Civic

– Customer demand for higher-specced, more comfortable Type Rs is displayed by the sale of just one of the stripped-down, lightweight models(with no parcel shelf, stereo equipment or audio speakers)